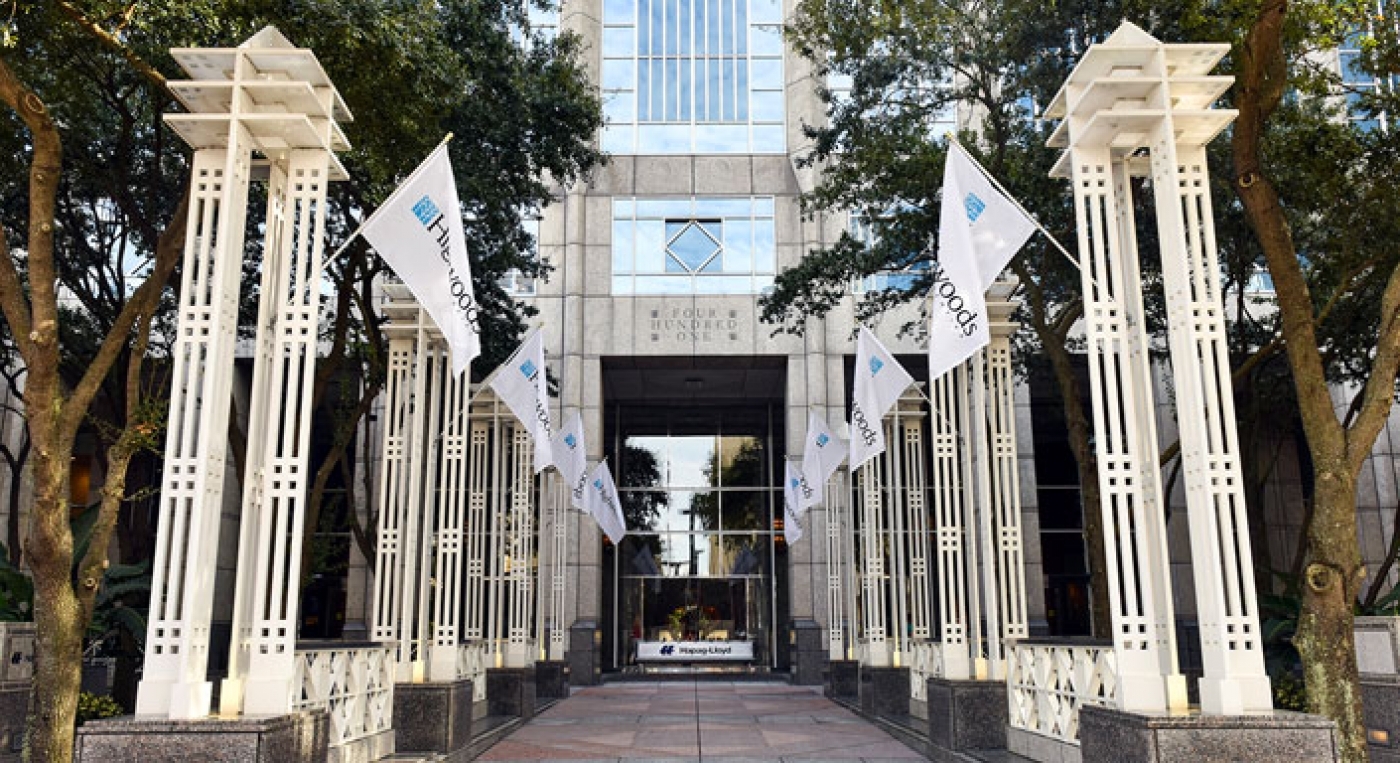 Ed Fritsch, President and CEO, stated, “The acquisitions of Monarch Centre in Buckhead and SunTrust Financial Centre in CBD Tampa strengthen our franchise of owning high-quality, trophy office buildings in our markets’ BBDs. These transactions provide substantial NOI upside through lease-up, rent growth, Highwoodtizing and operating efficiencies. Our plan is to effectively fund these acquisitions by selling Country Club Plaza at a cap rate meaningfully lower than the stabilized returns on our newly-acquired assets. With this sale, we will return our leverage ratio to the low end of our 40% to 45% comfort zone, simplify our business model and garner G&A savings.”

A presentation highlighting the transactions described in this release can be accessed here.

Acquisition costs of $0.8 million relating to this transaction will be expensed in the third quarter.

Ed Fritsch, president and chief executive officer, stated, “In combining Monarch Centre with One and Two Alliance Center, we own some of the most desired office space in Atlanta and control the most competitively advantaged location in Buckhead. These buildings provide easy access to Georgia 400 and Peachtree Road and are walkable to Phipps Plaza and Lenox Square, two upscale malls, and the Buckhead MARTA rail station.

Buckhead continues to be a rapidly tightening BBD. Since acquiring Two Alliance Center in 2011 and One Alliance Center in 2012, on this combined one million square feet, we have grown occupancy from 78% to 92%. We expect to garner additional operating and leasing synergies by owning Monarch Centre and both Alliance Center towers through shared parking, shared amenities, shared vendor agreements and customer expansions.”

The Company’s total anticipated investment in the building is approximately 40% below estimated replacement cost. The investment includes $9.1 million of Highwoodtizing. Occupancy at SunTrust Financial Centre is 89% currently and 77% with known near-term moveouts. During the first year, SunTrust Financial Centre is expected to generate cash net operating income of $8.0 million (excluding $0.5 million of free rent relating to long-term leases signed by the seller earlier in 2015) and GAAP net operating income of $8.6 million.

In connection with this acquisition, the Company also acquired an adjacent one-acre city block valued at $2.2 million that is suitable for mixed-use development. The site currently provides 245 additional parking spaces for the building.

Acquisition costs of $0.5 million relating to this transaction will be expensed in the third quarter. Highwoods Properties 3 Fritsch said, “SunTrust Financial Centre is one of the top trophy assets in CBD Tampa. The building offers spectacular views of Tampa Bay and the downtown skyline and provides numerous amenities for our customers. We have also identified a well-defined scope of opportunities for Highwoodtizing and we are excited about the significant improvements we will make to enhance the property.

“We are also pleased to have found the right opportunity to grow our presence in CBD Tampa, an emerging BBD. At June 30, 2015, Class A occupancy in this office submarket was 89.6%. Over the past four years, there has been a marked increase in restaurants, hotels and multifamily units. With its prime location in Tampa’s resurging CBD and meaningful occupancy upside, we expect SunTrust Financial Centre to be a solid performer.”

Fritsch stated, "This is an opportune time for us to monetize our retail-dominated assets in Kansas City and redeploy those proceeds into more strategically focused, higher-yielding office investments. The Plaza, which has been a solid and improving performer for our Company since our acquisition in 1998, is the Midwest’s premier shopping destination and the ‘Crown Jewel’ of Kansas City.” The Company intends to use the proceeds from the sale of Plaza assets to repay debt incurred to acquire Monarch Centre and SunTrust Financial Centre and for general corporate purposes. Some or all of the planned disposition of Plaza assets is expected to qualify for tax-deferred treatment under Section 1031 of the Internal Revenue Code.

The Company expects to close on the disposition of Plaza assets no later than early 2016. The Company can provide no assurances, however, that it will dispose of any Plaza assets on favorable terms, or at all, because the disposition is subject to the negotiation and execution of a definitive and binding purchase and sale agreement, and would then be subject to the buyer’s completion of satisfactory due diligence and other customary closing conditions.

Other Non-Core Disposition Activity
The Company has sold its 20% equity interest in SF Harborview Plaza, LP, a non-core joint venture that owns a 205,000 square foot building in Tampa’s Rocky Point submarket, for $7 million. The Company also received $21 million upon the payoff of a secured loan provided by Highwoods to the joint venture in 2012. The Company will record an approximate $4.2 million gain in the third quarter relating to this sale, which will not be included in FFO.

Merrill Lynch, Pierce, Fenner & Smith Incorporated served as Lead Arranger for the bridge facility, with Bank of America, N.A. serving as Administrative Agent. PNC Bank, National Association and Wells Fargo Bank, National Association are also participating lenders. The financial and other covenants under the bridge facility are similar to the covenants under the Company’s revolving credit facility.

Subsequent to its second quarter earnings release on August 4th , the Company sold 1.2 million shares of its common stock at an average gross sales price of $41.89 per share, raising net proceeds of $49.7 million. At September 30, 2015, diluted shares outstanding will be approximately 98.3 million.

The Company’s leverage ratio, including borrowings outstanding under the bridge facility, is projected to be approximately 45.5% as of September 30th. Upon the sale of all or substantially all of its Plaza assets, the Company expects to return its leverage ratio to the low end of its comfort range of 40% to 45%.

Certain matters discussed in this press release are forward-looking statements within the meaning of the federal securities laws, such as the following: the planned sale of all or substantially all of the Company’s Plaza assets and expected pricing and impact with respect to such sale, including the tax impact of such sale; anticipated total investment, projected leasing activity, estimated replacement cost and expected net operating income of acquired properties and properties to be developed; and expected future leverage of the Company. These statements are distinguished by use of the words "will", "expect", "intend" and words of similar meaning. Although Highwoods believes the expectations reflected in such forward-looking statements are based upon reasonable assumptions, it can give no assurance that its expectations will be achieved.

Factors that could cause actual results to differ materially from Highwoods' current expectations include, among others, the following: buyers may not be available and pricing may not be adequate with respect to the planned disposition of Plaza assets; comparable sales data on which we based our expectations with respect to the sale price of Plaza assets may not reflect current market trends; the financial condition of our customers could deteriorate; development activity by our competitors in our existing markets could result in excessive supply of properties relative to customer demand; development, acquisition, reinvestment, disposition or joint venture projects may not be completed as quickly or on as favorable terms as anticipated; we may not be able to lease or re-lease second generation space quickly or on as favorable terms as old leases; our markets may suffer declines in economic growth; we may not be able to lease our newly constructed buildings as quickly or on as favorable terms as originally anticipated; unanticipated increases in interest rates could increase our debt service costs; unanticipated increases in operating expenses could negatively impact our NOI; we may not be able to meet our liquidity requirements or obtain capital on favorable terms to fund our working capital needs and growth initiatives or to repay or refinance outstanding debt upon maturity; the Company could lose key executive officers; and others detailed in the Company’s 2014 Annual Report on Form 10-K and subsequent SEC reports.